My little baby girl has left me for preschool two days a week. She started this past week and mostly it went really well. Actually she went to the same preschool last year from about January until the end of April and she absolutely loved it. So my point is that it wasn't completely new to her. However, the older they get the harder it seems to be for them.

Last year I remember Sofia being so excited on the days she was going to preschool that she would run and hug the teachers and other random people as well 😆. But this go around she is a little more hesitant. Her mood changes from day to day, even hour to hour. At night she can be super excited about going, to then in the morning change her mind, and then changed it again as we walk into the school haha. I guess they are becoming a little more aware of themselves at this stage. But overall it's going very well 😅.

It's just such a good balance for both her and myself. Plus she will benefit greatly from a little more structure on a daily basis. Maybe my job will get a little easier with this extremely strong willed child of mine 😅. Plus I have actually started working. YEP, that's right!!! After almost 4 years at home with the children.

However, the job is only 10 hours a week which feels absolutely perfect at the moment. I can still do all my day to day stuff like dropping and picking the kids up. Basically I don't even think they will feel like they miss me. I'll have to write more about this job another day.

Have a great weekend everyone 😊.


PS. I couldn't believe how she would give me a different pose with every klick of the camera 😆 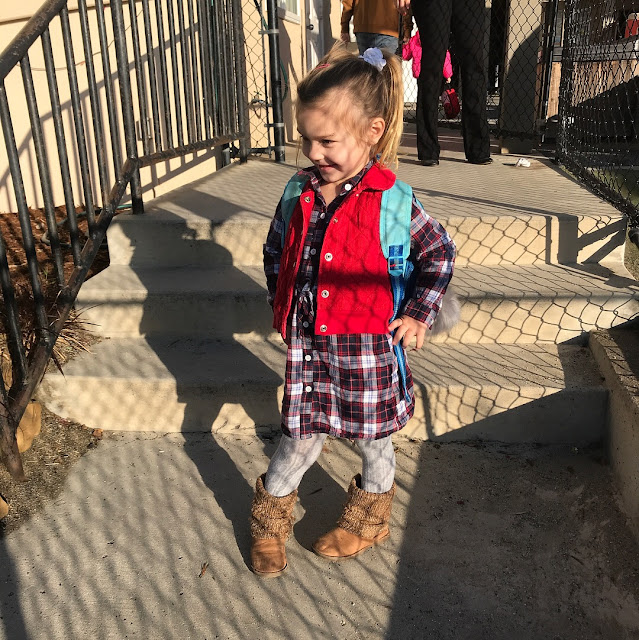 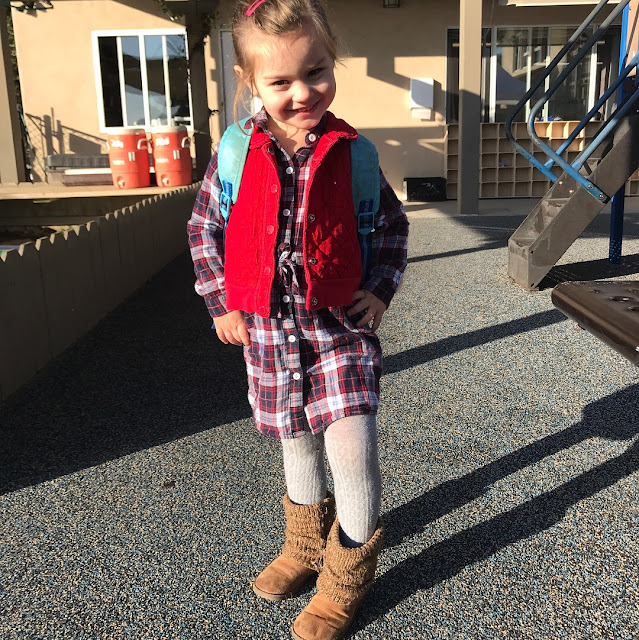 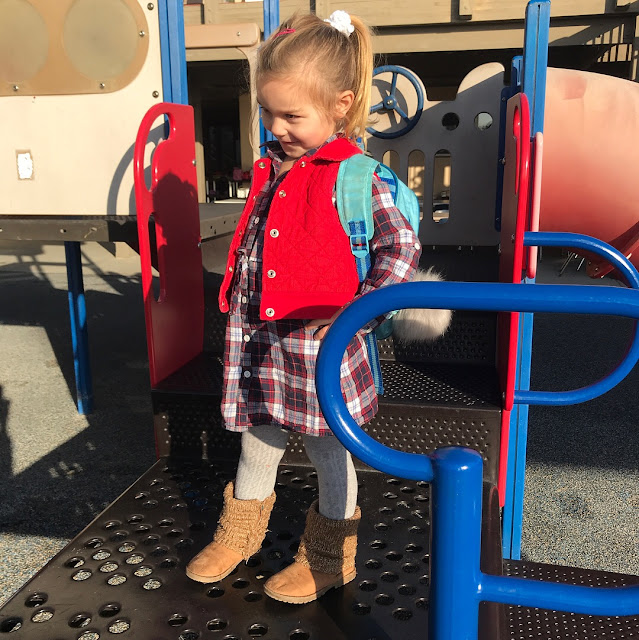 It's unbelievable to see the devastation of the "Mudslide" in Montecito and the "Thomas Fire" that is STILL not 100% contained. I don't think you can imagine how bad it really is unless you live here. And all of this is happening right in our backyard. Our community.

Two nights ago we woke up in the middle of the night to loud slams and dunks from the rain and wind outside. How could anyone have been able to predict the devastation we would wake up to the following morning?! I guess the firefighters and the rescue teams that have been here stand by since the Thomas Fire raged through Santa Barbara knew that this could potentially happen, so mandatory evacuations were issued for Montecito and nearby Carpinteria. Many people decided to stay behind anyways, despite the warnings. Again I don't think anyone could imagine in their wildest dream what were to come. And can you imagine having to evacuate AGAIN, just a couple of weeks after you were evacuated from your home during the Thomas fire? I sure can't.

Apparently the fire created such conditions in the dirt that made it perfect for a mudslide. Since all the vegetation and trees had burned the dirt wasn't held together by any roots and could therefore slide down the mountain.

We heard multiple terrifying stories the following morning of houses sliding down the whole mountain in Montecito, all the way to the water, across the 101 freeway. It's hard to even know how to process this. A guy from the gas station told me they had pulled a 6 year old's pajamas out of the mud and a couple of people from a school in Montecito were missing. We heard stories of families taking refuge on their roofs for hours and hours in the cold rain in the middle of the night before they were able to be rescued. One of a family with a 3 month old baby. A resident of Montecito told a story about seeing  a home floating by with a body pinned against it. This morning I heard on the radio about the owner of a local restaurant on the Mesa that was presumed dead, which wasn't the case but his partner had died. The last thing the owner remembers is shouting to his business partner that he needed to hold on to anything. He didn't make it. Absolutely heartbreaking 💔.

Cars, crushed homes looking like nothing more than broken up matches, boulders, mud, debris is all over Montecito, reaching down all the way to the ocean, causing the 101 freeway to be closed. it's covered in mud and other debris.

As of today I heard that the death count was up to 17, dozens missing and 100 homes destroyed in the mudslide 😞. Thank you to the firefighters and the rescue teams that have been out there non-stop doing an amazing job during this terribly sad time. Without them many more would be dead or injured.

Please pray for Montecito in this time of need 💝. 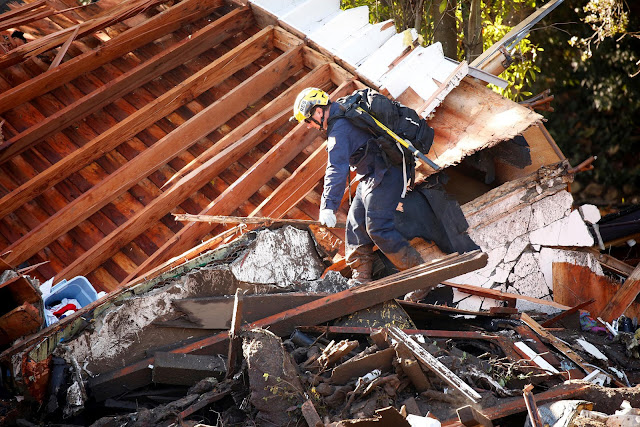 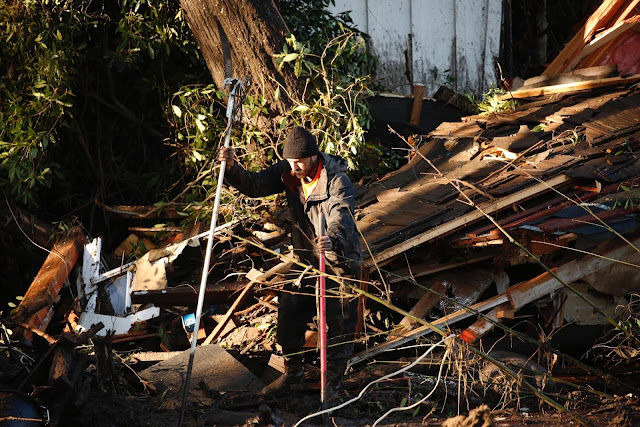 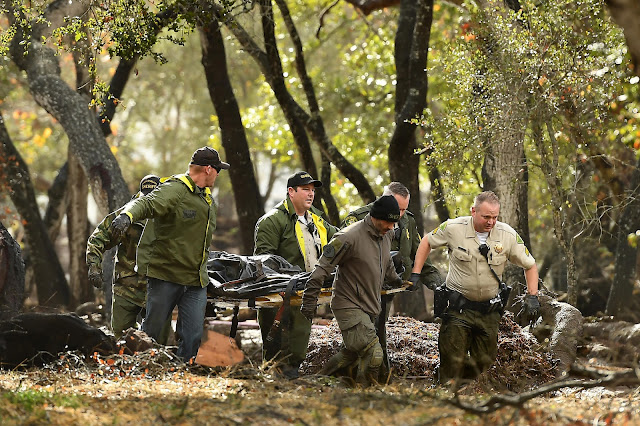 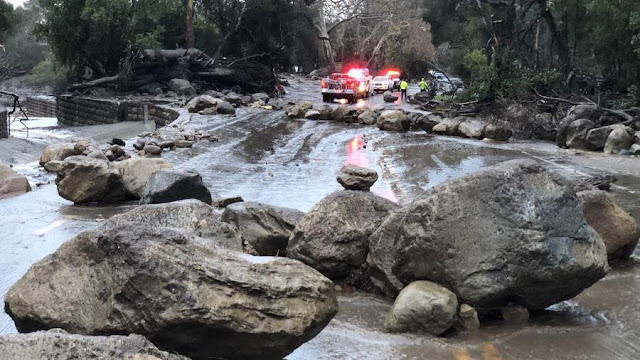 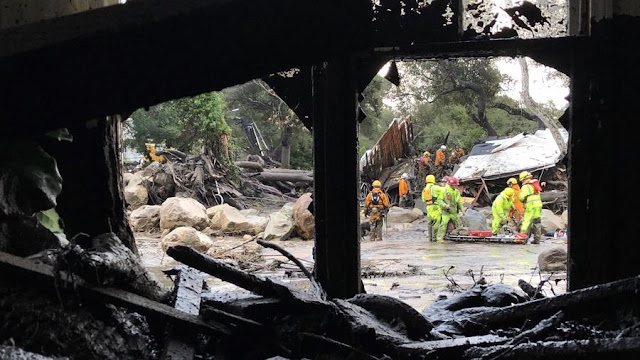 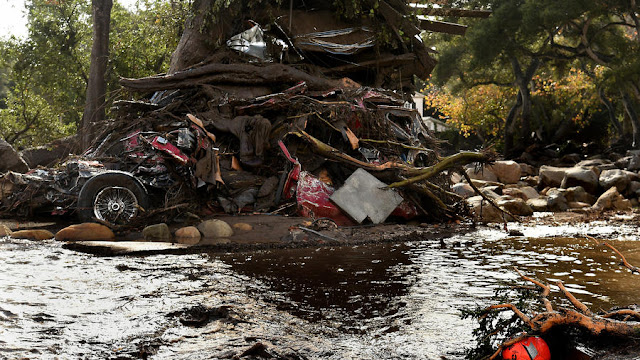 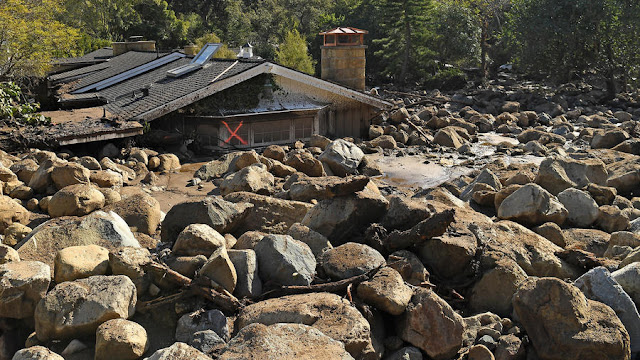 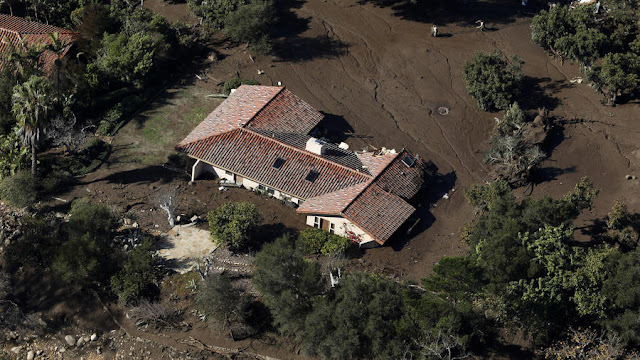 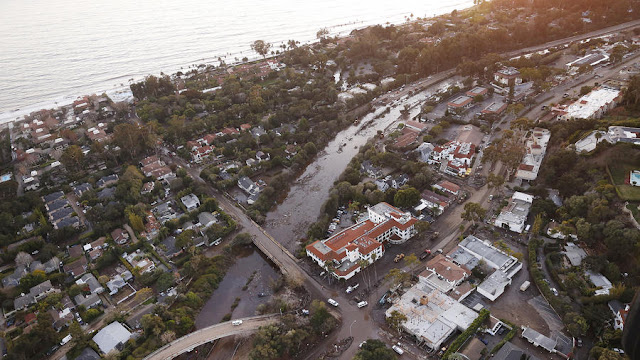 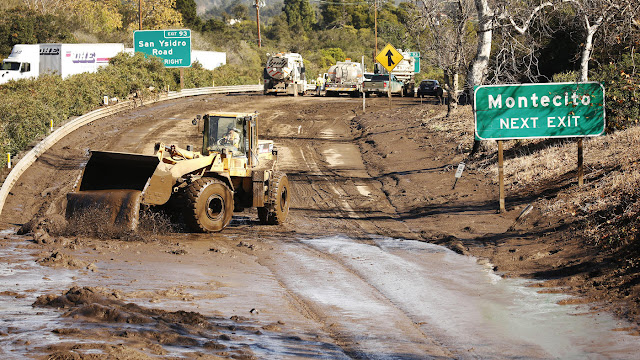 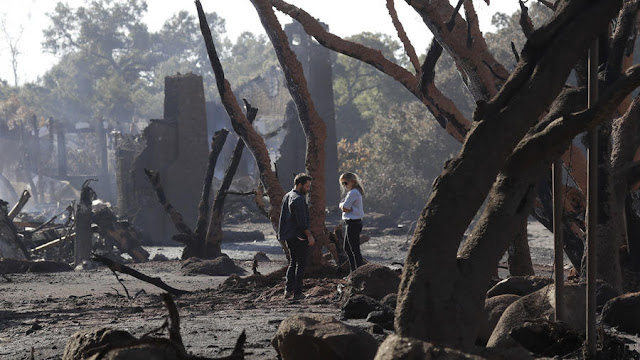 I can't believe what is transpiring here in southern California. As I'm sure you already know there are multiple fires burning ranging from LA to Santa Barbara. And today we woke up to a message saying that all of Santa Barbara School's are closed (even Goleta Unified School District is closed) due to the Thomas Fire. Over night the fire spread ranging from 90 square miles to 140 square miles due to high winds and humidity. The fire danger is 296, the highest it's ever been and there is hurricane 1 winds roaming through the mountains with strong winds on the coast too.

The air is so bad and ash is raining down all over us. So many homes have burnt down already. I can't even imagine how it would feel to have your house burn down. And right before Christmas. Obviously there is no good time for something like this but still...

Currently the fire is spreading, only 5 % is contained and it's burning only 20 minutes away from us, in Carpinteria. It seems that Summerland may be next to evacuate. Please pray for everyone here and that the fire don't reach Santa Barbara.

For a map of current fires - updated hourly click here...

Wow, what a day it's been! All day packing and preparing all while feeling so crappy. I managed to take tons of vitamins, drink lots of water and rest a lot through it all thank god. When we finally got on the road it was about 2:30 in the afternoon. We got to the hotel about 5:30 and it was full throttle. We checked into the hotel, threw everything in there and got ready to hop on the shuttle for downtown Disney.

WOW!!! I'm so in love!!! It's completely magical and so incredibly amazing. Especially now during Christmas time. Everything is decked out to the max. The Christmas effect is in full force.

The kids are so excited and loving every minute of it. Downtown Disney is like an event in itself.

Tomorrow we head to Disneyland!!!

Sorry not the best picture quality... 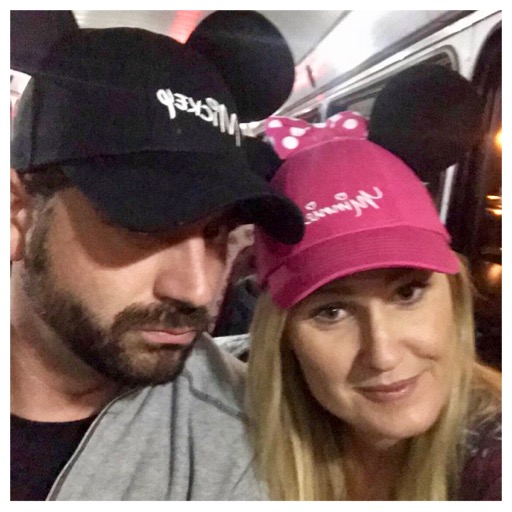 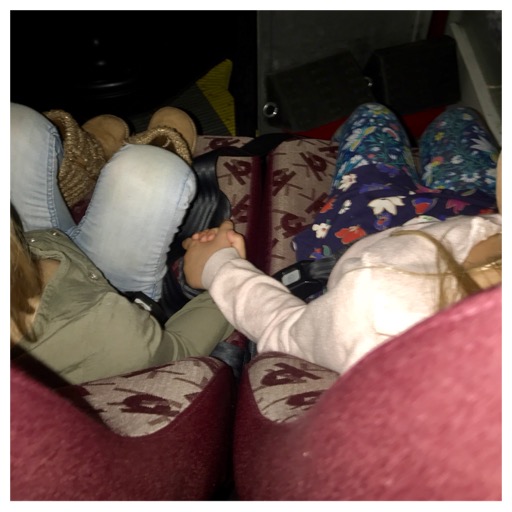 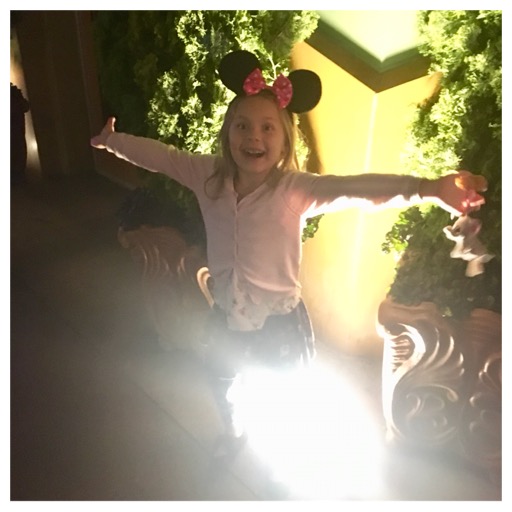 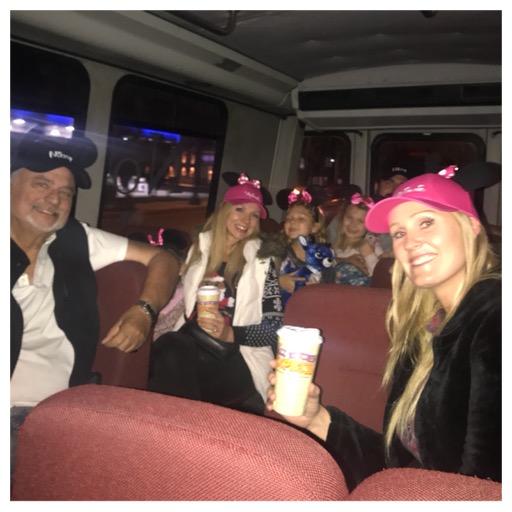 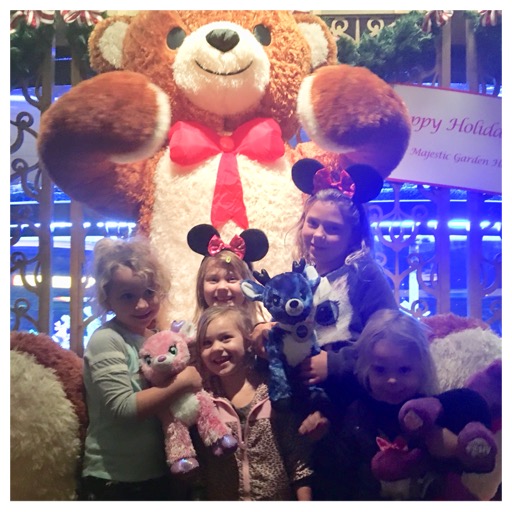 I can't believe that I'm laying here in bed still 😩. Today we have to pack and prepare everything for our Disney trip tomorrow morning. I'm kinda freakin' out right now. Thinking about all I have to do. Eric is telling me to just rest and pack everything at like 9pm tonight. I don't like doing things last minute like that but maybe I have to. I also have to try to go to the store. Ahhhh. Or maybe we can do that on our way out of town tomorrow?

Anyhow. Laying here in bed allows me to catch up on a few blog posts. I have maaaaany more to go. But here are two I just added :).

Our little ones are so excited because in just a couple of days we all head down with the rest of the family to Disneyland. We are all OH SO EXCITED!!! It's been many years since I visited Disneyland. I think I was in my 20's still 🙈. Our kids have never been to Disneyland before so they are definitely in for a surprise. They are so excited they can barely stand it.

Sofia is determined to meet Ariel, Rapunzel and Elena of Avalor. Lilja wants to meet Mickey Mouse and I'm of course dying to meet Donald Duck, my big idol! He has been my favorite from the very beginning. There is no one better.

The last time I went to Disneyland we couldn't find him. Eric was looking all over the place cause he wanted to make my dream come true. He even went into City Hall to ask for Donald. Apparently he had been in one of his moods that day so they weren't sure if he was coming out at all. We never did end up seeing him. So this time around I really want to make sure I meet him.

Have you ever been to Disneyland? If so what is your favorite attraction? 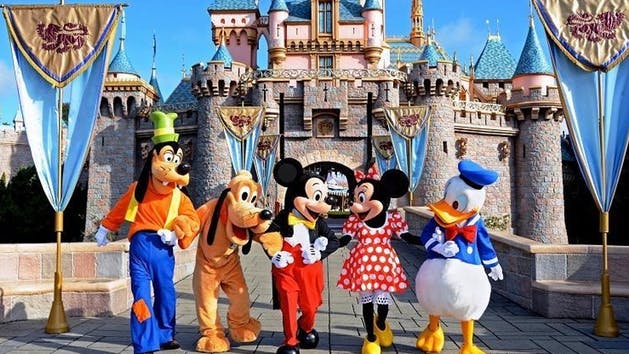 Thanksgiving was so much fun. We celebrated with good friends in LA. We cooked and cooked and cooked all day for the food to be devoured in just minutes 😄 while the kids played and the guys sat around drinking beers. It's really crazy when you think about it. All that time it takes - all that food but it's literally gone in just minutes. We need to start incorporating more of the mediterranean eating style where you sit at the table for hours, drink wine, conversate. Don't you agree? At least all the cooks out there 😛? And then the hilarious tradition of the men cutting the turkey after everything is said and done. The ones that didn't lift one finger to get the feast ready 😅.

Anyways we had a great day and I hope you did too! 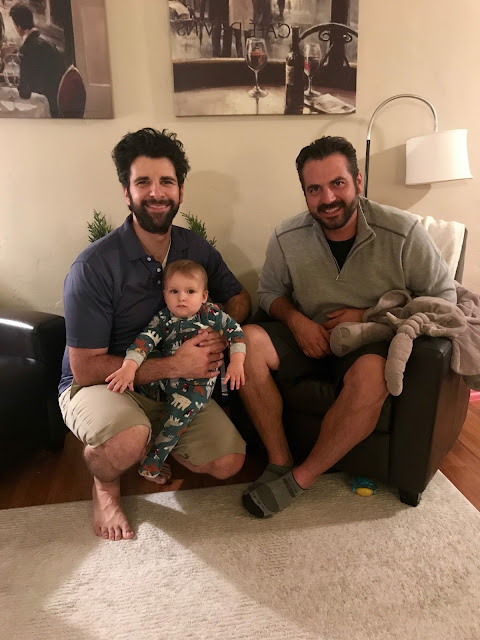 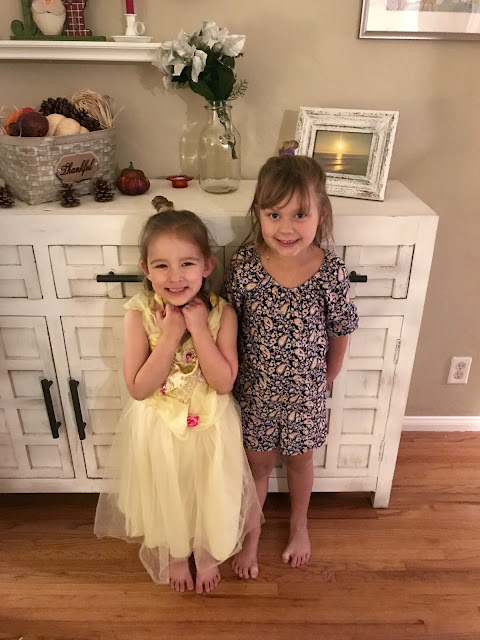 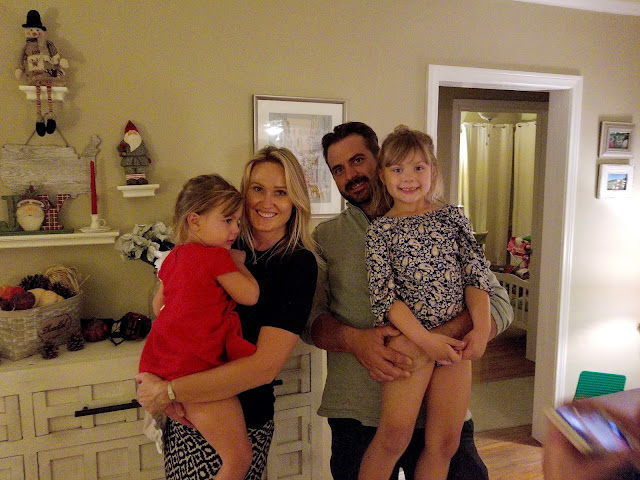